The more you know, the more effectively you can research and the more accurate your conclusions will be. With regard to using censuses for genealogy, that means understanding the instructions given to census enumerators. The instructions to enumerators for each individual census year are crucial to understanding the information recorded (or not recorded) for your ancestor. 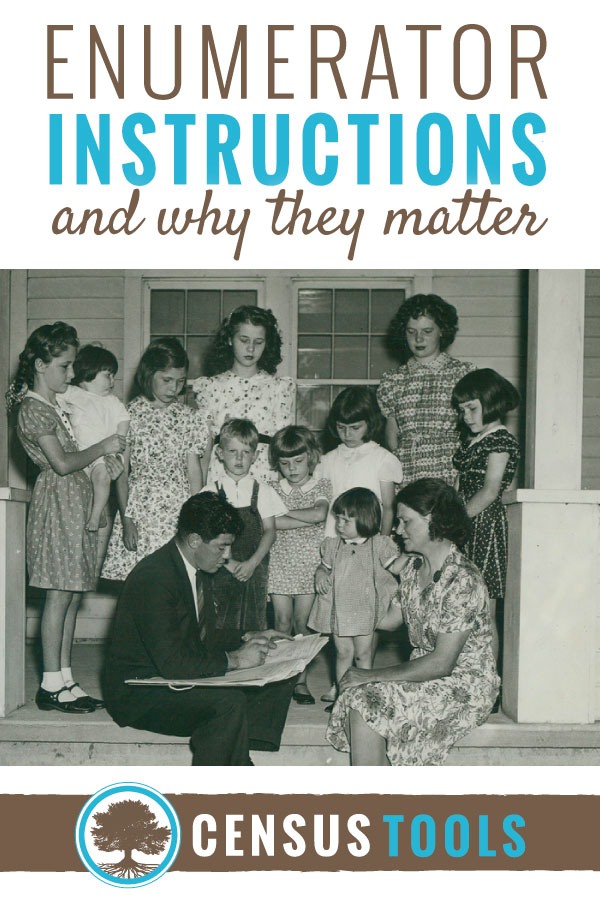 The U.S. Census Bureau has made enumerator instructions (and much more) easily accessible in a 148 page downloadable PDF entitled Measuring America: The Decennial Censuses From  1790 to 2000. Instructions to enumerators and images of census forms for each year are included, and handy charts (starting on pg. 119) summarize the questions asked on each year’s form. This is a reference file that you will use over and over.

Also of interest to us is “A note about microfilmed schedules for genealogy.”

Please note that the microfilmed images of schedules completed by an enumerator can have abbreviations, titles, comments, and even ‘‘doodles,’’ that do not correspond to any information contained in the instructions given to each enumerator. In such cases, the meaning of this entry has been lost with the enumerator. Furthermore, schedules will frequently have entries (within the schedule or its margins) that seem to have no relation to the question asked. The meaning of these entries have been lost so many years since the marks were made. Although these entries may indeed relate to the household, they often are related to the administrative duties conducted during receipt and tabulation of the schedules by Census Bureau clerks. For example, the letters ‘‘JGG’’ (or any other letters, numbers, or words) next to or within an entry may have been the initials of a Census Bureau clerk, used to indicate where he/she stopped for lunch or the end of the workday, or a manager making an administrative note, such as a shift change. Thus, abbreviations/marks found on the microfilms that are not explicitly identified within the instructions to the enumerators are impossible to definitively understand.((Jason G. Gauthier, Measuring America: The Decennial Census from 1790 to 2000 (Washington, D.C.: U.S. Department of Commerce, Economics and Statistics Administration, U.S. Census Bureau, 2002), 125; PDF download, IPUMS-USA (https://usa.ipums.org : accessed 6 February 2018), “A note about microfilmed schedules for genealogy”.))

I’ve linked to information about each decade’s census on the Census Bureau website, as well as additional information from IPUMS* where available:

The Library and Archives of Canada offers official information regarding the census for each year taken including a list of schedules and which ones survive, enumerator instructions, and more.

The National Records of Scotland offers official information regarding the census for each year taken including census questions, date of enumeration, enumerator instructions, and more.

As The Legal Genealogist says, “Read the directions.”

* The go-to source for federal census information in the U.S. is IPUMS-USA, a data project of the Minnesota Population Center. Its article “History of Enumeration Procedures” gives details about the laws regarding canvassers, enumeration districts, training, and more and is helpful in understanding the purpose and procedures for the federal censuses. Detailed information for each census year above and beyond the instructions to enumerators is available at the linked pages.