This post is part of the original CensusTools newsletter archive. It was written by CensusTools founder Gary Minder and updated to reflect changes in record availability.

A Waiting Gold Mine

You have diligently recorded (in a CensusTools spreadsheet of course!) all of the available information from the U.S. federal censuses for your ancestors, but you still have some gaps. Some of the federal records you were counting on were unreadable, and just when everyone in a family was finally listed by name in 1850, there’s that 2g-grandfather who somehow didn’t get enumerated. You’d love to be able to pinpoint when your paternal g-grandfather and his family moved from New York to Iowa, but the 10 year gaps between federal census returns doesn’t narrow it down much for you.

What’s a researcher to do? 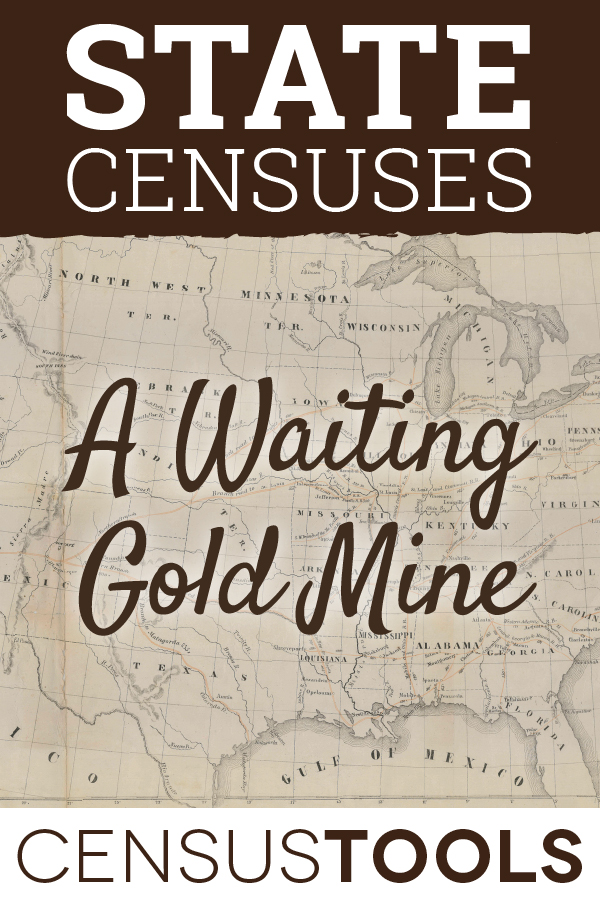 Get familiar with state census records! My own experience with state census records has been spotty because few of my ancestors were considerate enough to live in states like New York or Kansas with a long history of conducting regularly scheduled censuses. After extensive research to develop my various state census spreadsheets, I hope to acquaint you with the types of data that can be found and some online sources for additional information.

State census records can be just as informative as their federal counterparts.

Although they are not as widely available as federal censuses and may take some extra effort to find, state census records can be just as informative as their federal counterparts. The U.S. Census Bureau has a list of all state censuses taken but keep in mind that not all survived, and those that did might not include all counties.

Florida and Rhode Island have census data from as recent as 1945. Since we aren’t going to get a look at the 1950 federal census for a few more years, these post-1940 records can be a treasure trove.

In the 1925 Kansas census, each person in a family was enumerated. In addition to the standard demographic info (age, sex, color etc.), we find the birthplace and from where each person came to Kansas. Surviving war veterans had military information recorded including state in which enlisted, regiment, command and arm of service. Immigrants were asked their year of immigration and year of naturalization.

New York in 1925 wasn’t as comprehensive in questions asked, but the census header is quite detailed in terms of location and each family’s address was recorded. New York also recorded how many years a person has been in the U.S., as well as the date and place of naturalization.

Lucky researchers of Iowa ancestors can consult the 1925 state census, find the maiden name of a person’s mother, and learn the location of a parent’s marriage.

State census records can fill in where federal censuses were lost or included fewer questions.

Several states conducted censuses in 1885 and 1895, which can help compensate for the information lost from the destruction of the 1890 federal records.

The 1865 Massachusetts census recorded whether a person was a naturalized voter. For an immigrant ancestor, a check in that column could help narrow the search for a naturalization record.

When using state census records, you will need to know the county in which the individual lived. County boundaries change over time, so be sure you are looking in the right one (be sure you are in the correct state as well, since those boundaries also change). MapOfUS has online interactive maps showing county formation that will help you determine the correct county for the time period.

Look Up the Records

So where can we get a look at state census records?

The answer varies by state. No matter what state you are researching, it will take more time and effort to get access to state returns. Ann S. Lainhart’s State Census Records details extant censuses by state.

If you want to start your search for state census records online, FamilySearch has a wiki page for each state. Since wikis are user-edited, some are more complete than others, but many have extended resource listings. You can also browse Family Search’s records by state (use the map under “Research By Location” to choose your research area). Not all images are indexed, so when you get to the page for the state you are researching, look below the “Indexed Historical Records” to the “Image Only Historical Records.” These are non-indexed images which must be browsed by location.

If the state census you are looking for is not included there, you can order the microfilm by going to the card catalog on the Family Search website and entering the state to find the film number for the county and year you need, where you will find the option to order the film online for a reasonable fee (it will be delivered to your local FHC). Ancestry ($) has many state censuses online, and

AnceStories has a quick guide to where you can find state census records online.

If you are fortunate enough to be researching ancestors in states with an extensive census history, you have the opportunity to create a very detailed timeline using federal and state census records. This kind of analysis can answer many nagging questions and tie up a lot of loose ends in your research.

Be sure to track your findings; CensusTools Spreadsheets are a great tool for this and include many of the state censuses.